The Chairman of the Joint Chiefs of Staff

REPUBLIC OF KOREA CHAIRMAN OF THE JOINT CHIEFS OF STAFF 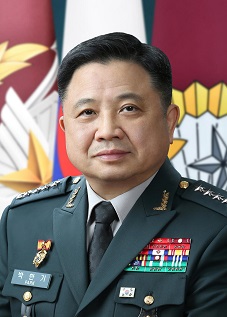 General Park, Hanki is the 41st Chairman of the Republic of Korea Joint Chiefs of Staff. Prior to assuming his current assignment, he served as the Commander of the Army 2nd Operations Command.

General Park was born in Buyeo, Chungnam Province, on January 16th, 1960 (Lunar Calendar). He was and ROTC cadet while attending the University of Seoul, both graduating and being commissioned as Second Lieutenant of February 21st, 1983

General Park is married to Ms. Lee, Chung Hee and has two daughters.